If you notice that you are becoming less enthusiastic and affectionate with your partner, this is one of 9 signs psychologists warn you about, indicating that you are not happy in marriage as you think.

9 signs psychologists indicating that you are not happy in marriage

1) Lack of enthusiasm and emotion

Psychologist Ted Houston summed up the experience of those who followed 168 couples for 13 years, beginning with their wedding, that a marriage that begins with a normal romance, and is less than what we see in emotional Hollywood films, usually sees a promising future, compared to a marriage that is characterized by exaggerated romance, He justified that by the fact that this intensity of feelings is difficult to contain and maintain all the time.

2) Withdrawing during a quarrel

If you distract from your partner during your fight with him, know that this is not a good sign for both of you.

A study conducted in 2010, published in the Journal of Marriage and the Family, revealed that “withdrawal” behaviors for husbands predicted a rise in divorce rates. This conclusion was based on researchers’ interviews with about 350 new couples living in Michigan, USA.

In 2007, researchers randomly contacted nearly 300 married couples, asking them a series of questions about their relationships and how they felt during their romance.

And the study showed an interesting finding: the more people think about their partner while not with them, the more they feel in love.

The study also included a follow-up with nearly 400 married couples in New York City, USA, which found that difficulty focusing on other things while thinking about a life partner is also linked to strong feelings of love, especially for men. 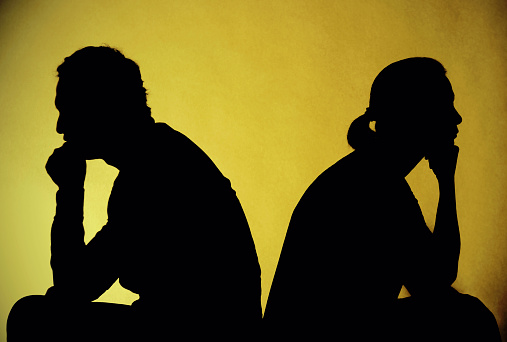 4) Don’t spend time with your friends

According to Ellie Finkel, a psychologist at Northwestern University and a professor at Kellogg School of Management, many modern couples place very high expectations about their marriages.

He explains: We expect our partner to be our lover, best friend, and therapist, but we are subjected to disappointment, and the alternative to this is to find friends, coworkers, and family members who can bridge those gaps in your relationship, to spend time with them. Besides spending time with your partner, this will likely make you not happy in marriage.

Researchers prepared a study published in the Journal of Marriage and the Family in 2016, in which they looked at nearly 400 couples, and used their comments about their relationships, to deduce from them four patterns of commitment: dramatic commitment, conflict-witness commitment, partner-focused commitment, and commitment. Associated with social.

As psychologist and relationship expert Gary Lewandowski explains, dramatic couples have shown many fluctuations in their commitment to their partners over time. While he noted that couples who positively focus on their partners, most of them experience commitment fluctuations to each other when they cannot spend much time together.

As for the commitment associated with socializing, couples usually experience ups and downs when their friends and family change their thinking about their relationship. And for spouses who always struggle, they fight a lot, but they have little fluctuations in their commitment level.

The study concluded that couples who focus on a partner are more likely to become more serious in their relationship, but dramatic couples are more prone to separation compared to other styles.

A body of research indicates that partners who have “positive illusions” about each other are more likely to stay together. In other words, in stable and satisfying relationships, each partner is keen to favor the other and see it as the best.

On the contrary, if you criticize your partner all the time, whether in appearance or behavior, and you always place them in comparison to your ideal partner, this is probably not a good sign.

If you start to view one of your co-workers as being an ideal partner for your life while you are married, this is a dangerous sign.

8) Balance does not work in all cases

Psychotherapist Rachel Susman believes, in her statements to “Business Insider” magazine, and from the fact that she deals with many dissonant husbands, that they achieve the attraction between each other, but with the time they begin to express their dissatisfaction with the habits of their partners that are incompatible with their nature.

9) Conflict with ideas and values

If you notice a conflict of ideas and values ​​between you and your wife, such as that you wish to have a child against her, this is a dangerous sign.

Psychologist Peter Pearson, the founder of the Couples Institute, believes for Business Insider that searching for someone who shares the same basic values ​​is a “sacred relationship,” as he describes it.

How many children is the perfect number?

Trust in a relationship, 9 reasons why trust is important

Breaking up and getting back together, How? Pros and Cons